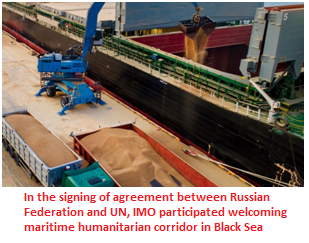 IMO Secretary-General Kitack Lim on Friday (22 July) welcomed the signing of an agreement between, the Russian Federation, Türkiye, Ukraine and the United Nations to establish a humanitarian maritime corridor to allow ships to export critical cargoes of grain and foodstuffs from Ukraine.

The agreement was signed in Istanbul, Türkiye after several weeks of talks.

IMO participated as part of the UN delegation.

Mr. Lim attended the signing ceremony in Istanbul.”I am very pleased that all parties have reached agreement on the way forward for ships to safely transport much-needed grain and other commodities through the Black Sea. This agreement would not have been possible without the spirit of cooperation by the countries involved and the leadership shown by UN Secretary General António Guterres in proposing this initiative,” IMO Secretary-General Lim said.

“The safety of ships and seafarers remains my top priority. IMO instruments, including the International Ship and Port Facilities Security (ISPS) Code, underpin this agreement for safe and secure shipping through the Black Sea. I commend the efforts of all involved, particularly the IMO Member States – Russian Federation, Türkiye and Ukraine.”

The IMO Council, at its 35th Extraordinary Session in March, requested the IMO Secretary-General to collaborate with relevant parties to initiate the establishment and support the implementation of a blue safe maritime corridor in the Black Sea and the Sea of Azov.

Speaking at the signing ceremony, UN Secretary General António Guterres said, “Let there be no doubt – this is an agreement for the world. It will bring relief for developing countries on the edge of bankruptcy and the most vulnerable people on the edge of famine. And it will help stabilize global food prices which were already at record levels even before the war – a true nightmare for developing countries.

Specifically, the initiative we just signed opens a path for significant volumes of commercial food exports from three key Ukrainian ports in the Black Sea – Odesa, Chernomorsk and Yuzhny.

The shipment of grain and food stocks into world markets will help bridge the global food supply gap and reduce pressure on high prices.