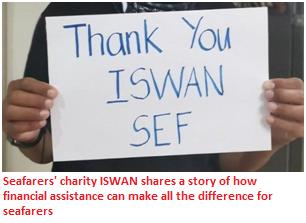 When a seafarer or their family is involved in a sudden and unforeseen crisis, they may need urgent financial support. In cases where no other help is available, the Seafarers’ Emergency Fund (SEF), managed by the International Seafarers’ Welfare and Assistance Network (ISWAN), can provide immediate, essential aid.

One seafarer’s family faced an unimaginable challenge when not just one but two family members were diagnosed with cancer in the same year and they needed to find enough money to cover the overwhelming costs of treatment.

The seafarer, John, and his wife, Mar Lou, had taken their pre-school son to hospital when they noticed that a small lump on his neck had doubled in size in just one week. After numerous hospital visits and tests, their son was diagnosed with Non-Hodgkin's lymphoma.

John and Mar Lou’s son began undergoing chemotherapy three times a week, and while John returned to sea to ensure the family had an income, Mar Lou remained at home to take care of their son. John was stranded in Manila for four months before he was finally able to embark.

Devastatingly, Mar Lou herself was diagnosed shortly after with a type of bone cancer.

She would need to start chemotherapy and be admitted to the hospital for treatment every 21 days. Although the family also managed to secure some financial support from a number of organisations for their son’s treatment, this and John’s salary would not be enough to cover the medical costs for both family members and their savings were exhausted.

The family contacted ISWAN in the Philippines, who applied to the Seafarers Emergency Fund on their behalf. The maximum grant available was approved and the funds were sent to the hospital to pay for Mar Lou and her son’s chemotherapy.

On a phone call with ISWAN’s team in the Philippines, Mar Lou said that the grant had relieved her husband of these expenses and he could now focus on his work on board, although there were still a lot of medical expenses to be expected. While John was still on board, he remained in touch with his family every day to check on how they were doing. Mar Lou also said that it was a great relief for their SEF application to be approved and they would consider receiving this support in their time of crisis as one of the greatest things that had happened to them.