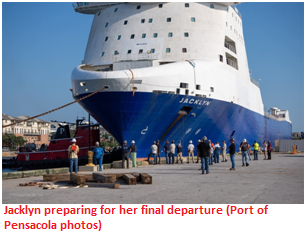 for her final voyage. Instead of the grand vision of converting the former Stena vessel into an autonomous Landing Platform Vessel, she however left the port on the end of a towline bound for the scrapyards in Brownsville, Texas.

The Port of Pensacola reports that they were approached about the vessel docking at the port three years ago for up to about one year. The plan called for the vessel to undergo maintenance and repairs in the port as well as the first stage of the modification process. Blue Origin had planned to move the vessel to another location to complete the work.

The company had said it was considering other uses for the vessel, but officials at the Port of Pensacola are saying the conversion had progressed to the point of making it not practical for the ship to resume a more traditional operation.

The end came , August 14, as a single tug was secured to the vessel. Along with the port’s local tugs, they hauled her away from the dock and guided her out the channel to the Gulf of Mexico. The tug has begun the final voyage expected to end at one of the Brownsville scrapyards in the coming days.