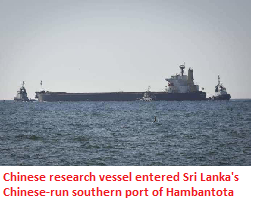 Chinese research vessel entered Sri Lanka's Chinese-run southern port of Hambantota  despite concerns from India and the United States about its activities.

The Yuan Wang 5 entered the Hambantota deep sea port after securing permission to enter Sri Lankan waters on the condition it will not engage in any research, the port officials claimed.

The vessel was originally due to arrive last week, but Colombo asked Beijing to defer the visit following objections by India, which shares Western concerns about Chinese activities in the region.

But on august 13th, after intense negotiations, Colombo announced a U-turn, saying permission had been granted for the ship to dock at Hambantota and remain for six days.

Shipping analytics websites described the Yuan Wang 5 as a research and survey vessel, but according to Indian media, it is a dual-use spy ship.

New Delhi is suspicious of Beijing's increasing presence in the Indian Ocean and influence in Sri Lanka, seeing both as firmly within its sphere of influence.

The Hambantota port is run by China, which leased it for 99 years for 1.12 billion US dollars. Sri Lanka have been claiming that entry into Hambantota Port will be decided by Sri Lankan authorities though the port is owned by a Chinese company on a 99 year lease. Now it is clear that the Chinese call the shots in the port they own it.

.A day before the arrival of the vessel, India gifted a Dornier 228 surveillance aircraft to Sri Lanka in a bid to bolster the island's maritime surveillance capabilities.