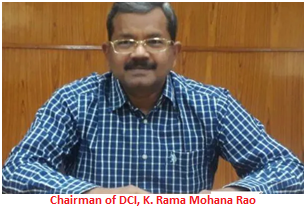 Dredging Corporation of Indiais swinging back to recovery

Dredging Corporation of India Limited (DCIL), a mini ratna company, which was facing a liquidity crunch till about a month ago and was unable to pay its salaries on time, appears to be back on its track and is swinging back to recovery.

A few years ago, the company faced tumultuous internal conflict, when the government had announced its disinvestment and after much resistance by the employees, the stakes were picked by four major ports.

Speaking about the bad times and its revival, Chairman of Visakhapatnam Port Authority, who is also the Chairman of DCI, K. Rama Mohana Rao, said the fortunes of a company like DCI is plummeting down looks mysterious. Dredging is an integral and continuous operation of port management. By maintaining good relations with the four major stakeholder ports and by adding a few others, the company can easily survive and also make profits, he said.

“Immediately after taking charge of the operation after the exit of the earlier managing director, the first thing we did was to improve our liquidity by getting funds from the stakeholders and renewing our contracts and relationship with them,” he said.

“We already got a cash liquidity of ₹192 crore from Deendayal Port Authority and we are expecting a few hundred (₹500 crore) more from the rest of the stakeholder ports and also from Mangalore Port and Cochin Port,” he said.

The DCI has also bagged a contract from the Cochin Port for dredging with the contract value being around ₹159 crore.

Another primary aspect taken up is augmenting and modernising its existing fleet of dredgers.

“We are also looking forward for some good business from the State government, as it plans to come up with a number of small ports,” he said.