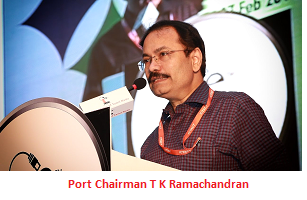 The VOC Port administration plans to transform the port into Transshipment hub of the East coast by taking up the development of outer harbour project, Port Chairman T K Ramachandran said in his independence day address.

Two continuous quay of one thousand meters each will be constructed at an estimated cost of Rs 7164 crores.

An expression of interest was invited by the port authorities for this project which was cleared by the Union cabinet way back in 2014.

The outer harbour project was announced as the flagship project of the government in the Union budget presented to the lok sabha on May 2014. The project was put on back burner for nearly seven years and the port administration instead decided to strengthen the inner harbour.

Port industry sources said since the strengthening the inner harbor cost the port more than the Outer harbor project, the outer harbour project has been revived now

Mr Ramachandran spoke about the contribution made by the stakeholders for helping the Port to handle 34.12 Million Tonnes of cargo and achieve a growth of 7.33 per cent during the last financial year 2021-22.

He also outlined a green vision for the port listing out the renewable projects being implemented including the proposed Hydrogen park.