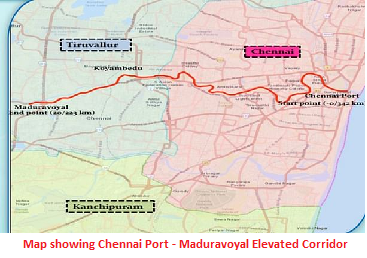 Resumption of work on the Chennai port Maduravoyal corridor which was scheduled next month is likely to be indefinitely delayed due to fresh conditions imposed by the navy according to media reports.

The Navy has put fresh condition that until the flats are constructed for their officers, they will not hand over the defense land required for the crucial infrastructure project Chennai port Maduravoyal Elevated corridor project to facilitate speedy movement of containers from the Chennai port to the nearby highways.

Ten years ago when the corridor project was conceived it was going to cost Rs 1,819 crore, but now it will cost Rs 5,862 crore.

The corridor starts near the Napier bridge which is close to Chennai port gate  and ends at Maduravoyal on the Chennai-Bengaluru highway a distance of about 21 kilometers. It is another matter how the intense movement of tractor trailers carrying containers could cause pollution since the corridor passes through the heart of the city.

While the project is expected to take 24 to 36 months to complete, the priority is to obtain land belonging to the Indian Navy by constructing separate quarters for them on army land in Saidapet.