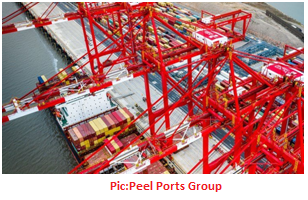 Hundreds of port workers at the Port of Liverpool, one of the UK’s largest container ports, will strike over pay and working conditions.

More than 500 dockworkers voted for strike action after being offered a 7% pay increase by MDHC Container Services, part of Peel Ports, the second largest port group in the UK. The Unite union said the offer was inadequate and far below the current real inflation rate, which the Bank of England estimates could reach 13% this year.

“The strikes, the dates of which have not yet been set, will bring Liverpool container port, one of the largest in the country, grinding to a halt,” the Unite trade union said.

The move comes as the industry braces for an eight-day strike at the country’s largest container port, Felixstowe, scheduled to run later this month, threatening to disrupt UK trade and put further pressure on the supply chain. Around 1,900 workers at Felixstowe will down tools on August 21.

Commenting on the ramifications for European liner calls with the potential twin strikes in the UK, Lars Jensen, CEO of liner consultancy Vespucci Maritime, suggested via LinkedIn: “With such large strikes carriers are likely to have to offload UK-bound cargo in major hubs such as Antwerp and Rotterdam and as a consequence further worsen existing congestion problems on the continent as well.”

The likely UK disruption comes at a time where European ports were just beginning to see a reduction in the logjam that has plagued ports for months.