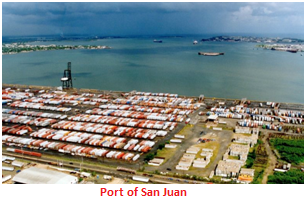 A federal grand jury in Puerto Rico has returned an indictment charging seven defendants with running a criminal enterprise dedicated to extorting and misleading shipping companies into paying fees for the loading and unloading of cargo at the Port of San Juan—Piers 9, 10, and 11—under the threat of strikes and blockades on the part of union members of the ILA-1740 of the International Longshoremen’s Association, AFL-CIO (ILA) and under false representations that companies had to pay a fee in order to be able to use union-free labour for the loading and unloading of cargo.

The indictment includes a forfeiture allegation related to the total value of the loss, approximately $1,184,524.26, and one residential property, a vehicle, and a boat.

Pedro Pastrana-González and his ex-wife, Iara Clemente-Rivera, owners and managers of local firm JCPY, aided by a public employee and Puerto Rico Port Authority worker, Jorge Batista-Maldonado and Carlos Sánchez-Ortiz, the president of the union ILA-1740, were charged with running the fraudulent scheme.

Members of the enterprise took some of the money made from the scheme and concealed it in JCPY and as payments to ILA-1740’s employee benefit plan.

Pastrana-González, Clemente-Rivera, Victor F. Torres-Barroso, José A. Fernández-Cruz, and Carlos A. Hernández-Laguer were also charged in the indictment for their participation in an agreement to take funds and falsify records of the plan.

“Schemes such as the one uncovered and charged in this indictment, negatively impact local economy and stalls the economic progress the people of Puerto Rico deserve,” said Joseph González, special agent in charge of the FBI San Juan field office. “This scheme was sustained by silence, and I hope the work we’ve done here with our partners, serves as a motivation for those with information, to speak up.”