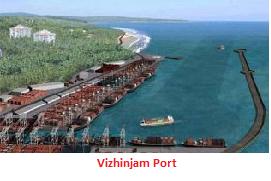 Vizhinjam Port has run into Rough Weather once again

Vizhinjam port which is all set to be commissioned by early next year has again run into rough weather with the local fishermen up in arms putting forth several demands including arresting of widespread sea erosion near the port area. The agitated fishermen held a massive demonstration in Kerala’s state capital Tiruvananthapuram demanding the state government action in this regard. Some groups are also staging an indefinite Satyagraha against the Adani port in Vizhinjam of Kerala.

The central government has given a grant of nearly five hundred crores rupees to the Adani port as viability gap funding.

The Port has been facing series of problems like breakwaters having been washed away in repeated cyclones that hit the west coast in the last few years. The Port is also facing severe shortage of rocks to rebuild the breakwaters. Since people of Kerala are ecologically sensitive the rocks are being brought from neighboring Tamil Nadu though they are available in Patanamthita district close to Vizhinjam port.

The agitating fishermen are clamoring about marine erosion, demanding rehabilitation from the Port management, and long-term solutions to the marine problems. They asserted that hundreds of acres of coastal land adjoining the port got devastated since the Port construction commenced way back in 2015

The protesters say that they feel helpless and angry about having to live in camps for the past four years after a cyclone destroyed their homes. These camps, which are either in abandoned FCI godowns or schools, are only temporary buildings with minimal infrastructure facilities.