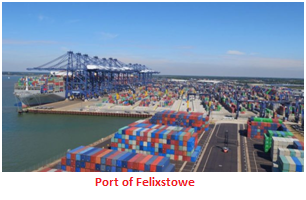 The proposed strike at the port of Felixstowe could result in over US$800 million in trade being disrupted according to the ALPS Marine analysis by Russell Group.

Clothing (US$82.8 million) and electronic components (US$32.3 million) will be the commodities that would be impacted the most by the strike, according to Russel Group's analysis, which was based on previous trade flows at Felixstowe in this August period.

Over 1,900 members of the British trade union Unite will strike at the port from 21 August until 29 August in a dispute about a pay increase.

"Many leading businesses are concerned about the impact that the strike will have on supply chains.  It is taking significantly more time, for logistics and risk management experts to plan their strategies which means they have had to throw extra resources to address shipping issues, for example, that previously were not a problem," said Russel Group.