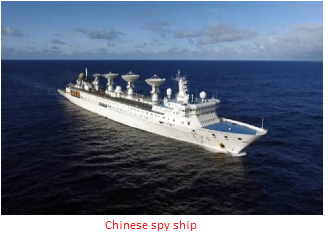 The Chinese scientific research vessel the Yuan Wang 5 arrived at the Hambantota Port on August 16th early morning brushing aside concerns from the Indian side about the intent of the vessel. The vessel was welcomed by the Sri Lankan flag waving members of China Sri Lanka friendship society as it got berthed in the harbor owned by a Chinese company. The vessel will remain at the Hambantota Port till August 22nd nearly one week according to Sri Lankan media reports.

Giving the sequence of events leading to berthing of Chinese spy vessel in Hambantota port this morning, the media report said the Chinese Embassy in Colombo informed the Sri Lankan Ministry on August 12th via Diplomatic Note that the ship was scheduled to arrive in the port of Hambantota on August 16th and applied for clearance for replenishment purposes for the new dates 16- 22 August. Having considered all material in place, the clearance for the visit of the Chinese ship was issued by the Sri Lankan government on August 13th

While no rotation of personnel was to take place during the call, the Sri Lankan government was requested to provide necessary assistance and positive consideration to the request made by the Chinese Embassy. The Ministry circulated the said request among relevant stakeholders in Government for approval, namely the Ministry of Defense, the Sri Lanka Navy and the Telecommunications Regulatory Commission of Sri Lanka (TRCSL) before the diplomatic clearance for the berthing of the vessel was given.

The Sri Lankan Government says it has since engaged in extensive consultations at a high level through diplomatic channels with all parties concerned, with a view to resolving the matter in a spirit of friendship, mutual trust and constructive dialogue, taking into account the interests of all parties concerned, and in line with the principle of sovereign equality of states. In light of concerns raised, the Ministry also sought further information and material that could assist in consultations on the matter.

Issuing a statement, the Sri Lankan foreign Ministry reiterated Sri Lanka’s policy of cooperation and friendship with all countries.“Security and cooperation in the neighborhood is of utmost priority. It is Sri Lanka’s intention to safeguard the legitimate interests of all countries, in keeping with its international obligations. The Ministry is deeply appreciative of the support, solidarity and understanding of all countries, especially in the current juncture when the country is in the process of addressing severe economic challenges and engaging in multiple domestic processes to ensure the welfare of the Sri Lankan people.”