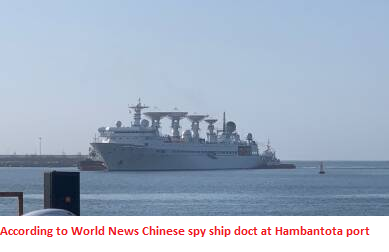 China plays down the visit of spy ship to Hambantota port

China has played down the high profile visit of its spy ship to Hambantota port saying such visits are very natural. Chinese ambassador to Sri Lanka Qi Zhenhong was there at the port to receive the vessel this morning according to Sri Lankan media reports.

This kind of research ship visiting Sri Lanka is very natural. In 2014 a similar ship came here," Zhenhong told reporters when asked about the visit. Asked about the Indian concerns, the Ambassador said, "I don't know, you should ask the Indian friends

The ship maintained a very strict security operation with no one being allowed on board. The Sri Lankan decision to postpone the visit caused much controversy in the country as the visit had been cleared in mid-July.

Commenting on the ship's arrival, the Cabinet spokesman Bandula Gunawardena said the issue was settled amicably. "Relations with all countries are important to us," Gunawardena said.

India has traditionally taken a stern view of Chinese military vessels in the Indian Ocean and has protested such visits with Sri Lanka in the past.

The ties between India and Sri Lanka had come under strain after Colombo permitted a Chinese nuclear-powered submarine to dock in one of its ports in 2014 when Mr Mahinda Rajapakshe was the Sri Lankan President.