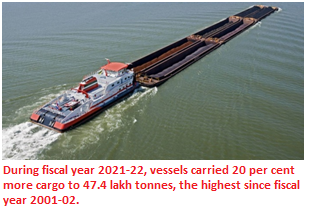 Cargo movement through waterways between Bangladesh and India rose to a new height in fiscal year 2021-22 as local entrepreneurs, particularly cement makers, found the river routes convenient to bring their raw materials, mainly fly ash, from the neighbouring country.

During fiscal year 2021-22, vessels carried 20 per cent more cargo to 47.4 lakh tonnes, the highest since fiscal year 2001-02, from that a year ago, according to data of Bangladesh Inland Water Transport Authority (BIWTA).

In other words, cargo movement on river routes of Bangladesh and India nearly doubled in four years from 24 lakh tonnes in fiscal year 2018-19 thanks to increased production of cement to meet a surge in demand for construction of mega public projects and private buildings.

This is the third consecutive year cargo movement through waterways between India and Bangladesh has being growing.

“We see increased awareness and interest among businesses to use waterways in recent years. In the past, people were not that much aware about the scopes to use rivers routes,” said a senior official of the BIWTA.

A portion of the cargo is also exported to India using the protocol routes, the official added.

Under the protocol, there are 11 ports or terminals in each country to load and unload imported and exported cargoes.

Of that, water transporters mainly use Narayanganj and Mongla in Bangladesh and Kolkata and Haldia in India, according to operators.