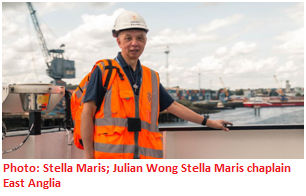 Charity Stella Maris has found itself providing support for seafarers stuck on board vessels in the Port of Felixstowe during an eight-day strike by dock workers.

Stella Maris chaplain Julian Wong had visited the vessel on 19 August before the strike started and had left contact details.

With the vessel still stuck in port once the strike started the chaplain visited the vessel and its crew again on 24 August.

“I provided transport for six seafarers. Three of them stopped off at the Seafarers' Centre and later walked into town and I drove the other three into town to the post office. They needed to exchange some currency and wanted to do a bit of shopping.”

The extended stay the George Washington Bridge provided an expected opportunity for one Filipino seafarer to reunite with his brother, who lives in Nottingham, for the first time in seven years.

The brother had travelled to Felixstowe, hoping to meet the seafarer. On 25 August Wong was able to drive the seafarer to a cafe in town to meet his brother.

“With the ongoing strike a lot of people’s attention is, understandably, focused on operational and business matters. At Stella Maris we continue to focus on the seafarers who live and work on board these ships,” Wong said.

The strike by 1,900 members of Union Unite is scheduled for eight days from 21 – 28 August, however, the union has said the strike will escalate unless Felixstowe Docks, run by Hutchison Ports, returns to the table with an improve wage offer