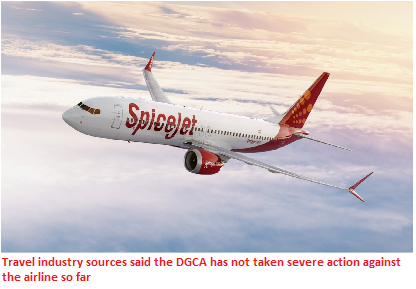 Yet another spice jet plane develops snag in midair

The budget airline SpiceJet flight SG-8363 took off from Delhi at 6.54am and returned after an hour of its departure time. The Boeing 737 aircraft landed safely and the passengers were being shifted to a smaller Q400 aircraft.

SpiceJet B737 aircraft VT-SLP, operating flight SG-8363 (Delhi-Nashik) developed a technical snag and so had to return to delhi.

Spice Jet aircraft have been involved in a series of incidents following which the Directorate General of Civil Aviation (DGCA) issued a show-cause notice to the airline. Travel industry sources said the DGCA has not taken severe action against the airline so far

In July, the aviation watchdog said that SpiceJet has failed to establish safe, efficient and reliable air services and asked the airline to explain why action should not be taken against them. It later ordered the airline to operate a maximum of 50 per cent of its flights, which were approved for the summer schedule, for eight weeks.

During the summer schedule the airline was already operating only 50 per cent of the flights.

Industry sources said the action was meant for newspaper headlines.