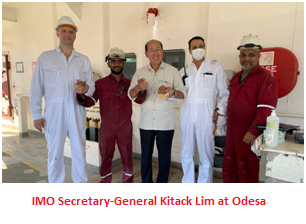 In Odesa, on Monday (29 August), Secretary-General Lim was able to gain first-hand experience of the Black Sea Grain Initiative and hear how ship safety and port management is being implemented.

“I appreciate the UN and all other stakeholders for the establishment of the Black Sea Grain Initiative and its excellent implementation. The initiative has paved the way to allow significant volumes of grain exports to move from three key Ukrainian ports in the Black Sea,” said Mr. Lim.

Secretary-General Lim boarded the MV Helga, one of the ships inspected under the Black Sea Grain Initiative and approved to journey to Odesa to pick up grains from Ukraine for export.

“I am deeply appreciative to see the strong commitment of the seafarers to support the Initiative. The safety and well-being of seafarers is my top priority. I am pleased that the designated maritime humanitarian corridor under the initiative is allowing seafarers to do their job and deliver vital foodstuffs. IMO instruments, including the International Ship and Port Facility Security (ISPS) Code, underpin safe and secure shipping everywhere and especially through the Black Sea,” Mr. Lim said.

The IMO Secretary-General was hosted by Mr. Oleksandr Kubrakov, Minister of Infrastructure in the Government of Ukraine and the two had a fruitful discussion during the visit.

Since the start of the conflict in Ukraine, IMO’s priority has been to support the welfare of seafarers, recognizing that the need for international shipping to move freely and unhindered is critical to the continuous operation of global supply chains, for the benefit of all peoples of the world.

The Black Sea Grain Initiative specifically allows for significant volumes of foodstuffs. The Joint Coordination Centre has been established in Istanbul, with representatives from Ukraine, the Russian Federation, and Türkiye, under United Nations auspices, to coordinate the safe passage of ships of all flags.