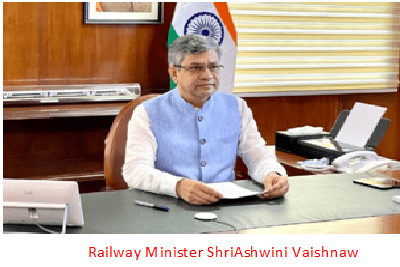 The target of developing 300 Gati Shakti terminals within the next five years is doable and will boost the cargo movement on the Indian Railway network, bringing down overall logistics cost of the country said Railway Minister ShriAshwiniVaishnaw.

According to sources, the new railway land policy will result in incremental annual revenue of Rs 30,000 crore after five years to the national transporter.

An official statement said that the revised land policy has been formulated while keeping in mind the PM Gati Shakti programme and the target to develop 300 Cargo Terminals over the next five years.

According to ShriVaishnaw, the five year limit and renewal requirement in earlier railway land policy was a hindrance for higher investments.

ShriVaishnaw said that the bid parameter will be on the share of Terminal Access Charge (TAC) and Terminal Charge (TC) that the operator would like to share with the Indian Railways. This is similar to the current process for bidding out terminals but it did not cover public sector undertakings, which were given a special dispensation.