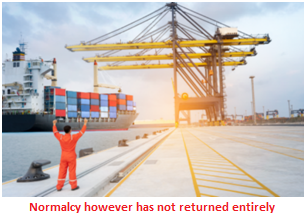 Shipping container traffic that had been severely congested during the pandemic is clearing and shipping prices are falling by a record margin in a sign that snags that had bedeviled global supply chains are finally easing.

According to Nomura Research Institute, the number of container vessels waiting offshore of the Port of Los Angeles-Long Beach has declined from more than 100 in January — when it was at its highest — to less than 10.

The ship traffic jam at West Coast ports began in late 2020 due to the spread of COVID-19. Port workers, as well as the truck drivers that transport containers inland, were in short supply, greatly reducing the capacity to handle loads. Ships were forced to wait offshore.

The backlog worsened from summer last year, when it took about 30 days to ship from Asia to the West Coast, two to three times longer than usual.

The longer the voyage takes, the fewer vessels are available, and the world’s overall transport capacity is reduced. Traffic jams were also occurring at ports on the U.S. East Coast and in Europe, creating disruptions in maritime logistics that became a major factor in global supply constraints.

Rates are also falling. Shipping a container from Shanghai to the West Coast cost $3,959 in the first week of September, down 23% from the previous week. This drop was more than $1,000, the largest since 2009 when such statistics first became available.

Container shipping is not the only supply chain factor improving.

Normalcy, however, has not entirely returned. The index is declining, but it is still higher than it was before the pandemic. The same is true for container rates. Although falling, they are still double the pre-pandemic level.

The easing of the maritime logjam is also due in part to the decline in housing markets as a result of monetary tightening in the U.S., which has boosted mortgage rates. According to the U.S. Department of Commerce, housing starts in July were down 9.6% on the month. Sales of existing homes compiled by the National Association of Realtors also declined for the sixth consecutive month in July.