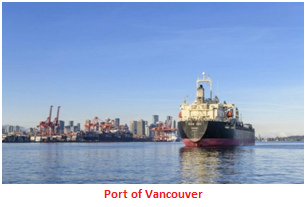 Local 502 of the International Longshore and Warehouse Union (ILWU) started a strike on September 16 at Westshore Terminals LP’s coal export terminal at the Port of Vancouver on Canada’s Pacific coast.

Members of Local 502 and two other ILWU Locals have been without a contract since January 31. Despite the involvement of conciliation/mediation assistance since March 29, negotiations did not result in a new collective bargaining agreement.

Operations at Westshore have come to a complete stop.

Robert Lewis-Manning, president of the Chamber of Shipping, which serves and represents the marine industry on Canada’s West Coast, expects vessel congestion caused by the strike to complicate operations as Canada’s grain crops are currently being shipped to British Columbia for export. “So, trying to find places to keep ships while they’re waiting for cargo is going to be the big challenge,” said Lewis-Manning.

Westshore is the biggest of three major coal terminals in B.C. Others are Neptune Terminals in North Vancouver and Trigon Terminals at Prince Rupert, further north on the coast.

Canada’s biggest coal exporter, Teck Resources, is “taking action to mitigate any potential impact, including diverting shipments to other terminals,” according to a statement from spokesperson Chris Stannell.

“All Teck mines are continuing to operate,” Stannell said, and “we are monitoring the situation closely and will take further steps as necessary.”