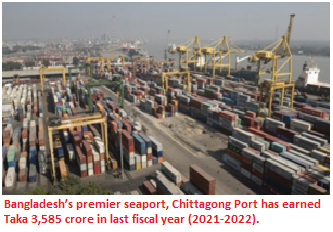 Reports claimed this while adding the port spent Taka 2,520 crore as taxes, port development project costs, Government VAT, salaries and allowances of port officials and employees and municipal tax and excluding the same the net income of the port is Taka 1,075 crore in the 2021-2022 fiscal.

Meanwhile, speaking to the media, Secretary of Chittagong Port Authority (CPA), Omar Faruk, reportedly, said that more profit has been earned this year and that the profit will be spent on the development project of the port.

“Many projects, including PCT, Bay Terminal and Matarbari deep seaport, are in progress. New equipment are being procured to increase the capacity of the port,” further, reportedly, added Omar Faruk.