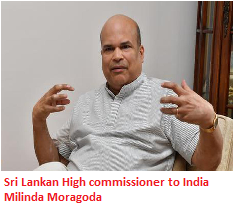 "China is a very close friend. But India is our brother and sister; I quote this by former Prime Minister Mahinda Rajapaksa, Sri Lankan High commissioner to India Milinda Moragoda said

Trying to play down the docking of Chinese spy ship at Hambantota Port, Mr.Moragoda said the decision to allow the docking of the ship ‘Yuan Wang 5’ was taken at the level of “officials” in the chaotic time when former president Gotabaya Rajapaksa was leaving the country.

Approval for this docking was granted when we were in a state of chaos on the ground," the high commissioner was quoted as saying on the sidelines of his inter action with the media at the Indian Women’s Press Corp in Delhi.

He also dismissed any political involvement in the decision.

(The decision to dock the Chinese spy ship was taken by former President Gotabaya Rajapakshe much before the Colombo uprising. Rajapakshe brothers had close relations with China for over two decades.)

On the matter of the docking of the Chinese research ship at the island's southern port last month, the Lankan envoy said his country was working on a framework for cooperation with India to avoid issues. I think the lesson we have learnt is that we need to have very close cooperation and coordination with India and we also need to have a framework of cooperation and we are discussing that,” Moragoda said. He said India was the anchor for security in the region.

The high commissioner extended gratitude to India for providing a “strong lifeline” during the economic crisis in the island nation and hoped that it will play a crucial role in the economic revival of his country.

“We are very grateful, it was at a time when nobody stepped up. India provided a strong lifeline for Sri Lanka. Going forward, we can work together on economic revival,” he said while interacting with the media at the Indian Women’s Press Corps (IWPC) in Delhi.