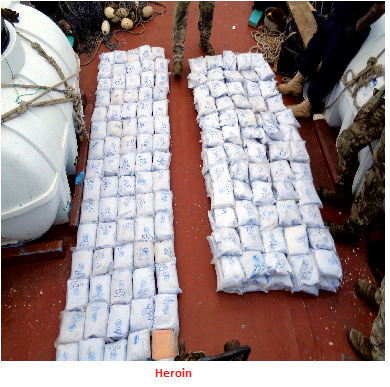 In what is described as India’s biggest drug haul, the Delhi Police has seized a container with approximately 22 tons of licorice coated with heroin valued at Rs 1,725 crore at Nava Sheva Port, Mumbai.

According to the Special Cell of the police, which conducted the operation, this was one of the biggest seizures of heroin.

“The value of heroin seized was approximately Rs 1,725 crore. The container was transported to Delhi. This seizure indicates how narco-terror is impacting our country and international players are using different methodologies to push drugs into our country,” a spokesman of the Delhi police was quoted in the local media.

This massive drug haul comes exactly a year after the Directorate of Revenue Intelligence (DRI) in September last year made the largest contraband seizure in the history of the country by seizing a consignment of contraband weighing 3,000 kg and worth Rs 21,000 crore at Mundra port in Gujarat.

The DRI had seized the heroin, concealed in a consignment of semi-processed talc stone, between September 17 and September 19, 2021, at Container Freight Station of Mundra port.