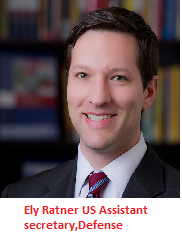 US concerns on Chinese presence in Indian Ocean

These are things that we are concerned about and have had good discussions with out Indian counterparts in this regard. We will continue the exercise in future too said Ely Ratner US Assistant secretary, Defense

China's actions in the Indian Ocean include a non-adherence to international law, use of "coercive economic tools" to achieve security goals, and a lack of transparency in efforts to establish overseas military bases, a senior US defense official has said.

The US side is engaged in "good discussions" on such concerns with Indian counterparts since American concerns go beyond China's growing naval presence in the Indian Ocean, Ely Ratner, the US assistant secretary of defence for Indo-Pacific security affairs, said.

We see a pattern in Chinese behavior throughout other parts of the world including non adherence to international law, lack of transparency and its efforts to establish military installations overseas as well as use of coercive economic tools to achieve security aims, he said.