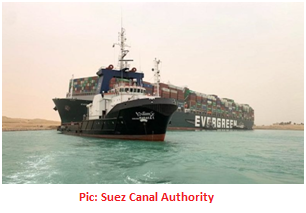 A group of cargo owners and their insurers are suing the ship’s owner, Japan’s Shoei Kisen Kaisha, at a court in London over the accident, which saw the giant Evergreen-operated ship, carrying thousands of containers to Europe, unable to leave Egypt for months until fines were agreed upon between the shipowner and the Suez Canal Authority (SCA).

The latest court case has been brought by Adriaanse Import & Export, JDM Food Group, Rewe-Zentral, TFC Holland and insurers AIG and Allianz. Much of the claims relate to food which had spoiled by the time they reached their destination many months later than planned. The shippers and their insurers claim that the grounding happened thanks to the decision to speed through the canal and the failure to stick to the deepest, central part of the waterway.

The cargo owners told the High Court the shipowners “were negligent and/or failed to act with reasonable care and skill in breach of their duties.”

The court papers filed in London allege that the master of the ship, which was managed by Bernhard Schulte Shipmanagement, was sailing for 18 minutes above the 12-knot speed limit at which point the ship lost control, veered from side to side before grounding with its bow firmly lodged in one of the banks of the canal, blocking intercontinental trade for close to a week and creating the most high profile shipping accident this century.

Previous court cases have heaped significant criticism on the two pilots onboard the Ever Given.

“The grounding of the giant Ever Given has shown the world the hidden reality of our economic system,” Sylvain Gauden, chief underwriting officer for marine and energy reinsurance at SCOR, stated.

“The big lesson is that some sand and wind can potentially cause a tragedy of global proportions. This demonstrates the fragility of our economic and social models,” Gaudensaid.In total, SCOR, one of the world’s largest reinsurers, estimates as many as 400 ships were blocked in total, with a host of other vessels deciding to avoid the area entirely and take the longer route via the Cape of Good Hope.

Claims from the grounding include physical damage to the Ever Given, loss of revenue on the part of the SCA, the cost of the salvage operations and business interruption for owners and charterers of the blocked vessels, loss of perishables and cargo delays, as well as damage to the canal itself.

SCOR said it would take many more years to settle the claims from the Ever Given.

“Reinsurers will have to absorb the bulk of the claims, which could amount to more than $2bn,” SCOR stated