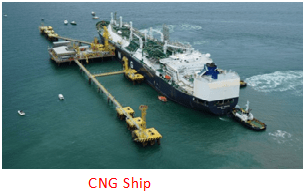 First CNG Port of the World to come up in Bhavnagar

World’s first CNG import terminal will come up in Bhavnagar. Prime Minister ShriNarendraModi will lay the foundation stone of the terminal on September 29.

To be built at a cost of Rs 4,024 crore, the terminal will provide an additional alternate source of energy to meet the growing demands of clean energy in the country.

AnMoU was signed by Gujarat Maritime Board with a private organisation for setting up Compressed Natural Gas (CNG) terminal in Vibrant Gujarat Summit in January 2019.

The construction of the port is expected to commence in the first half of 2023 and the port will be operational in 2026.

It will have state-of-the-art infrastructure and the world’s fourth largest lock gate system. The lock gates, once closed, do not let tides affect the docked ships. In addition to the CNG Terminal, the port will also cater to the future needs and demands of the Bhavnagar district for upcoming projects such as vehicle scrapping, container manufacturing, and Dholera Special Investment Region in particular.

The port will also have ultra-modern Container Terminal, Multipurpose Terminal and Liquid Terminal with direct door-step connectivity to the existing roadway and railway network connecting to the largest industrial zones, Dedicated Freight Corridor and northern hinterland of India.

According to JitenChhagani, General Manager of Gujarat Maritime Board, the port will have a capacity of 5-6 MMTPA (million metric tonne per annum). It will be a private port jointly owned by UK-based Foresight Group and Padmanabh Mafatlal Group that has its head office in Mumbai.” Chhagani said, “Bhavnagar is a strategic location for the port which will boost development in the district. In fact, you can say that the next decade belongs to Bhavnagar. The project will give fillip to development of transportation, warehousing and logistics in Bhavnagar.”

Bhavnagar Collector YogeshBabanravNirgude said, “The new terminal will be an extension of the existing Bhavnagar port located at about 8 km from the main city. Bhavnagar port had one lock gate constructed by the Maharaja. Now there would be two more lock gates at the port. After the lock gates are closed the ships docked at the port would not be affected by high tides.”