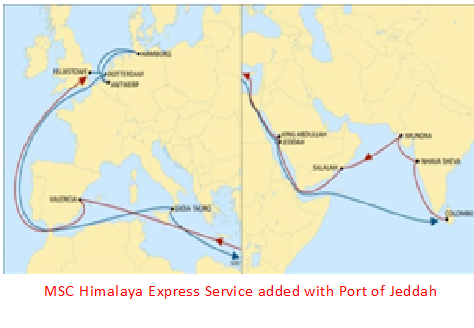 In response to market demand, and reflecting MSC’s longstanding commitment to serving the Saudi market, we have decided to introduce a new call at the port of Jeddah on MSC’s Himalaya Express service, says a recent statement from MSC.

of NWC Europe, as well as GioiaTauro and King Abdullah Port.

Export cargo from Jeddah may be transshipped via King Abdullah Port, Valencia and NWC Europe hubs in order to reach destinations.

The first vessel sailing from Europe to Jeddah will be MSC GAIA on voyage IS241R, scheduled to depart Felixstowe on 8 October and arrive Jeddah on 26 October.

The first ship sailing from India to Jeddah will be MSC IRENE on voyage IS241A, scheduled to depart Colombo on 9 October and arrive Jeddah on 23 October.