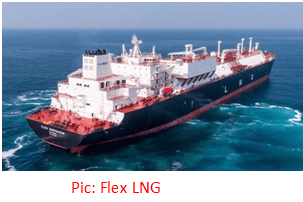 The scramble to source gas from ever further distances has pushed the LNG shipping sector to new extraordinary highs.

Positioning fees are now being included in negotiations and fixtures, driving up round-trip rates with both the Atlantic and Pacific basins reporting a frenzy of fixtures.

“LNG carrier rates continue to see strong upwards momentum due to a very tight ship available list,” a recent report from Jefferies observed, adding that the sector had benefited from strong demand out of both Europe and Asia for US-origin cargoes.

According to a recent post on LinkedIn from OysteinKalleklev, the CEO of Flex LNG, demand in Europe, Japan, South Korea, Taiwan and Thailand is expected to increase by a total of 46.6m tonnes this year with Europe accounting for 85% of this increase as the continent weans itself off Russian pipeline deliveries.

.“LNG term rates have risen to multi-year highs and with a European push towards energy security we now project trade in 2030 of 630m tonnes versus last year’s 380m tonnes,” a new report from Clarksons Research forecast, helping explain today’s extraordinarily large LNG newbuildorderbook, which now stands above 40% of the extant fleet.