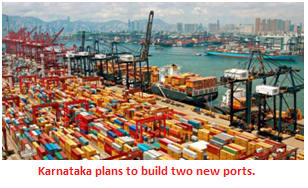 The Karnataka government has sought bids to build two new ports at Keni and Pavinakurve with private funds worth Rs 7,168 crore as the southern state looks to make up for lost time and catch up with other coastal states that have made big strides in developing port infrastructure.

Karnataka is the only coastal state that does not have a privately run non-major port (those administered by the state government) to boast. The state has a major port at New Mangalore which is administered and run by the Union government.

.The planned mega ports at Keni and Pavinakurve were announced by Chief Minister Bommai in his budget speech.

Aside Keni and Pavinakurve greenfield ports, the Karnataka government has called expressions of interest from private investors for developing Malpe, Byndoor and old Mangalore ports as part of a pipeline of 25 projects wherein the scope covers commercial cargo, cruise tourism, shipyards, marinas, seaplanes, and other value-added services.

This includes 12 projects that were approved under the Sagarmala programme to be funded jointly by the Union government and the Karnataka government.

Keni will be built to handle 30 mt of cargo in the first phase which can be expanded to 56.5 mt based on demand.

Pavinakurve will have capacity to handle 14 mt of cargo in the initial phase. The capacity can be expanded to handle 37.4 mt by 2050.  Both the ports will have water depths capable of handling Capesize ships, the largest of the dry bulk ships. The private developers will be free to set rates for services provided at the ports.

Port industry sources, though, say that the “stringent conditions” stipulated by the Karnataka Maritime Board for the projects could turn out to be a dampener. Port industry sources said that the Karnataka government’s decision to award the port projects to the bidder quoting the highest royalty per metric ton of cargo would push up the port handling costs and defeat the larger cause of reducing the logistics costs espoused by the Union government.

The Karnataka government disagrees with this view.