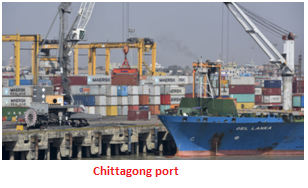 The Metropolitan Chamber of Commerce and Industry (MCCI)  said businesses require longer than 11 days found by the National Board of Revenue (NBR) in a recent study to release goods from the Chattogram port.

.MCCI President Md Saiful Islam, who was speaking at a luncheon for business journalists at the MCCI office in Dhaka, then said the time needed to release goods would greatly reduce if shipping documents were submitted and assessed online. “It does not require money for trade facilitation. What is needed is positive mindset,” he said.

The MCCI president also suggested the government make trade licences valid for five years so that businesses do not need to spend money and time on renewing them annually.

Islam went on to say that if companies are given environmental certification for a five-year period, then authorities could inspect their activities periodically and cancel the licence if any irregularities are found.

Bangladesh has been gradually losing its competitiveness in international trade due to poor logistics infrastructure .Bangladesh is set to graduate from the group of least developed countries (LDCs) in 2026.

Islam welcomed Bangladesh Bank’s initiative to allow currency swap with the Chinese yuan and Indian rupee as such steps will reduce the ongoing pressure on the country’s US dollar reserves.

According to the MCCI president, employment generation could be hampered as well as the domestic economy’s stellar performance in recent times could be undone by the ongoing crises.

Every era, some 2.5 million new job seekers enter the local job markets and the same will happen this year too, he said.

However, the robustness of the economy mainly depends on three important factors: a peaceful domestic political environment, geo-political situation as the Russia Ukraine war is continuing, and climate change, Islam added.