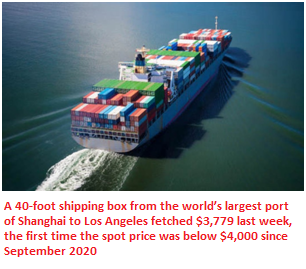 The cost of shipping goods from China has slumped to the lowest level in more than two years as the world economy stumbles, dimming prospects for container carriers that turned in record profits during the pandemic.

A 40-foot shipping box from the world’s largest port of Shanghai to Los Angeles fetched $3,779 last week, the first time the spot price was below $4,000 since September 2020 and half the level of three months ago, according to Drewry.

In what’s typically the peak season for seaborne trade, global demand for Chinese goods is waning instead as consumers cut back spending because of inflation and the shift away from goods toward services.

Factories in Europe and the rest of Asia are also scaling back production.

China’s economic slowdown is also cutting into import demand, with companies in Asia and Europe seeing weaker growth or declines in orders from Chinese companies.

The steady fall in spot container rates is putting pressure on carriers that have been pushing to sign more long-term contracts with customers as those prices soared into early 2022. Maersk, for instance, said recently it has about 72% of its long-haul volume on contracts.