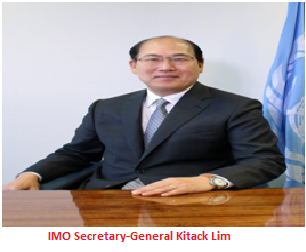 International Maritime Organization (IMO) Secretary-General Kitack Lim has welcomed the huge step made in securing funding for the first stage of a UN-coordinated plan to address the threat of a major oil spill from the FSO Safer, moored off Yemen.

Following a side-event in the margins of the United Nations General Assembly (UNGA) in New York, United States, it was confirmed that US$ 77 million has now been pledged following a funding campaign.

This is enough to begin the first, emergency phase of the planned operation. This envisages mitigating risks by transferring the oil in the decaying floating storage and offloading unit to a safe temporary vessel.

“I am pleased that the international community has come together to support the UN-wide efforts to mitigate the threat of the impending significant environmental incident,” Mr. Lim said. “This is a significant milestone in our collaborative work to address this threat. By acting now, there is a good chance to avert disaster.”

IMO has been supporting contingency planning efforts in the region to prepare for a possible spill from FSO Safer and to limit the impacts should one occur. An oil spill from FSO Safer would be a humanitarian and environmental disaster, with huge economic impacts for the shipping and maritime industry throughout the region.

The ministerial-level UNGA side-event was co-hosted by the Federal Republic of Germany. the Kingdom of the Netherlands and the United States of America.

An additional US$38 million is still required for a longer-term solution. Further funding pledges are welcomed and encouraged.