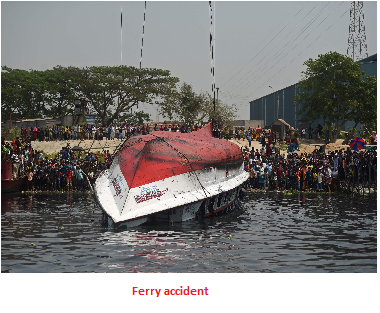 The death toll in Bangladesh ferry mishap rises to 61

The incident on September 25th near the northern town of Boda was the deadliest in years in Bangladeshy, which is crisscrossed by rivers where overcrowding on aged vessels is common.

Seventeen of those killed were children, authorities said, with video footage suggesting some were as young as around four years old.

The small vessel on its way to a popular temple flipped over in a river as onlookers screamed from the shore..

Boda police said rescue workers including firefighters, navy divers and villagers were searching for miles downstream on the Karotoa River, where the tragedy occurred.

The boat was carrying around 90 people, of whom around 50 were pilgrims on their way to the centuries-old Hindu temple for a major festival, according to police.

"We resumed the search this morning and rescuers found a few more bodies downstream and also under the water... Still a few more people are missing," the local police said.