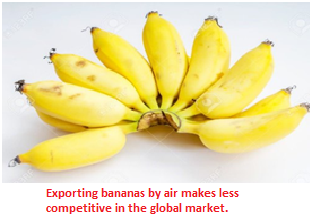 Despite being the largest producer of bananas in the world, India is ranked 20th in exports and has a meagre 0.6 per cent share in the global banana trade.

If India adopts an export-oriented strategy to upgrade the value chain, the country can increase its exports by four-fold and grab a spot among the top ten exporters.

India’s exports of bananas in FY22 was $160.52 million against global exports of $14.5 billion—a share of 0.6 per cent. Even, the world’s fifth largest producer Ecuador has a 24 per cent share.

According to K. Unnikrishnan, Joint Director General of the Federation of Indian Export Organisations, or FIEO, India can reach at least $500 million exports within five years to grab a 3 per cent share in global trade and be one of the top 10 exporters if it improves production, post-harvest handling and phytosanitary standards.

“Our research institutions and other stakeholders should come forward to provide solutions to increase shelf-life, reduce skin damages and improve technology and infrastructure for pre- and post-harvest processes,” he said.

The government should encourage major retailers and department stores in India to invest in post-harvest channels to procure banana and sell through stores with specified standards, branding and packaging.

“We need branding of bananas and the state governments should come forward to create state-specific brands and promote them in major markets. State Governments should also provide support for creating procurement, sorting, packing and processing centres,” he said.

Globally, bananas are exported entirely by sea-freight. However, in India, more than 60 per cent is exported through air.

This costlier mode restricts marketability of Indian bananas. There is a need for closer association with major shipping lines.

The UAE, Iran and Saudi Arabia together contributed 80 per cent of India’s banana exports during 2021-22.