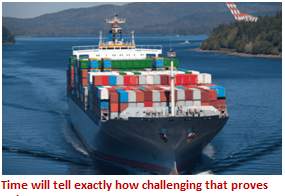 Much tougher times seen in 2023 for global carrier community

The latest data from the Xeneta Shipping Index (XSI®) indicates that global rates fell by 5.7%, with all major corridors experiencing negative import and export trends. This is the third month in a row rates have dropped, but the largest month-on-month decline recorded since the launch of the XSI® in 2019, as per an analysis.

“A drop in long-term rates is no surprise, but the scale of this demonstrates the challenges facing the industry at present,” said Mr Patrik Berglund, Xeneta CEO. He says that depressed consumer demand in the face of the cost of living crisis is leaving carriers in a position where they’re now “fighting for volume” after over two years of strong demand, supply chain congestion and under-capacity.

As we approach 2023, stormy waters await for a segment that is so often a bellwether for global economic well-being.”

Despite the negative indicators abundant in Xeneta’s real-time data, crowd-sourced from leading global shippers, Mr Berglund is quick to point out that the market is falling from a high. Global rates are still 67.2% up compared to November 2021, he says, although this is the first month since October 2021 when the index is less than 100% up year-on-year.

“That just demonstrates how strong the carriers’ position has been,” he notes, “and for how long. But, it seems, this will come to an end.”

“It’s difficult to see how the declines will be arrested in the short- to mid-term,” Mr Berglund comments.

“On the plus side, backlogs caused by congestion have eased in both the US and Europe. However, many European ports are still heavy with cargoes as shippers are increasingly using them as storage for goods they don’t currently need due to lower demand.”

Mr Berglund concludes: “After such a long, strong period of rates growth, its clear 2023 will usher in much tougher times for the global carrier community. Time will tell exactly how challenging that proves to be.”