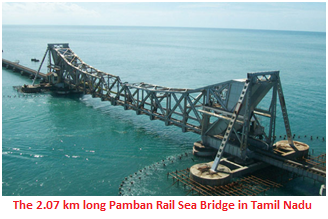 Around 84 per cent of work has been completed on India’s first vertical lift railway sea bridge – the new Pamban Bridge, Railways Ministry said in a twee on December 1.

The 2.07 km long Pamban Rail Sea Bridge in Tamil Nadu will connect the holy Rameswaram on Pamban Island to mainland India. It is also expected to be a boon for pilgrims travelling to Rameswaram and Dhanuskhodi as well as enhance tourism.

Railways Ministry said in its tweet that the track laying work is in progress, while the fabrication of the vertical lift span girder is about to be finished. “Assembling platform for vertical lift span on Rameswaram end of the bridge is getting ready.

Built at the cost of around Rs 540 crore, the new Pamban Bridge will facilitate the movement of ships across the railway bridge. The new link will replace the iconic Pamban bridge which was India’s first-ever sea bridge opened in 1914.

Developed by Rail Vikas Nigam Limited (RVNL), the new bridge is being constructed parallel to the old railway bridge. The Railways had said earlier that the middle portion rises in the new bridge to allow ships to pass through. The work on the bridge began in February 2020. The new bridge, which is 12.5 meters above ocean level, will be 3 meters higher than the old one and will have 100 spans across the sea,.

The bridge will allow two ships to cross it simultaneously. The 72-metre-long vertical lift span can be elevated to enable the movement of ships or steamers.

The old bridge using the Scherzer rolling lift technology that is manually operated and opens horizontally to let the ships pass through. Ships moving from north to south Tamil nadu coast and vice versa have to wait for days together for the lift to be operated by the railways leading to indefinite delays. With the commissioning the new bridge the passage of small ships will be smooth.

The navigational span can be lifted up to a height of 17 meter using an electro-mechanical system, unlike manual operations in the old one. While the old bridge is a non-electrified track, the new one will be an electrified railway track. The trains will be able to run at a faster speed on this dual-track state-of-the-art bridge. It will also allow trains to carry more weight.

The new bridge will solve the problem of speed restriction of 15 kilometers per hour with the old bridge.

The bridge 100 years old and has a lot of corrosion. The new bridge will have a speed limit of 65 kmph”. The double track in the new bridge’s substructure can accommodate “future doubling”.