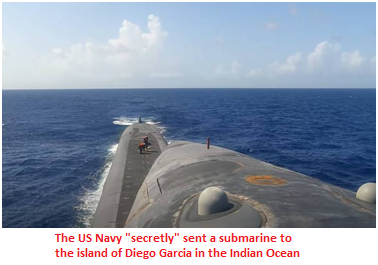 US Navy’s nuclear powered ballistic missile submarine has docked at the Indian Ocean island of Diego Garcia by the end of October as part of a month’s long deployment in the sensitive Indo Pacific region according to media reports. Contrary to US naval convention, its docking was publicized to send a message to both allies and adversaries in the region

The Navy, in its message, revealed the USS West Virginia's docking in the Indian Ocean and its visit to the port. When Navy submarines are in the sea, their specific movements remain highly classified, so the submarines would have got the required time to transit to a different location in the Indian Ocean because of the delayed announcement.

The importance of publicizing the USS West Virginia's port call is to relay a message to its potential allies as well as adversaries. “They should take from this that a ballistic missile submarine which is undetectable can operate in any ocean for an extended period,” said the official.

Both the US and British forces use Diego Garcia, which is a highly militarized island, located in the south of the equator. The nuclear-missile-equipped submarine's remote location helped it in ensuring that the 150-person crew remains unobserved by outsiders and the operations of the submarine remain a secret, allowing it to dock in the region for a longer duration.