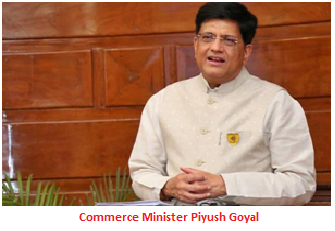 He was addressing a press conference after a review meeting on National Single Window System in New Delhi on December 5.

As many as 27 Central Departments and 19 states have been on board on NSWS.

The Minister said that National Land Bank has also been integrated into NSWS. He added that 1 lakh hectares of land in different industrial parks and estates are available on NSWS. The portal will become a one stop shop for buying industrial land, he said.

Renewal of licenses would also be brought under NSWS starting with 5 Ministries like Commerce and Industry, Consumer Affairs, Food and Public Distribution and Textiles.

The key objectives of the review meeting today were to ensure on boarding of investor-related clearances by Ministries/ Departments of the Central government and by the State Governments and UTs...

National Single Window System is an ambitious initiative which promises to be the game changer for increasing investments and reducing compliance burden in the country.

The system would lead to convergence of all Ministries/ Department and States/ UTs through the “whole of Government approach”.

Various ministries, states and Union Territories have worked in close coordination with DPIIT and NSWS Team to bring this portal up and running. Industry Associations have given valuable feedback from time to time that helped improve and optimize the system.