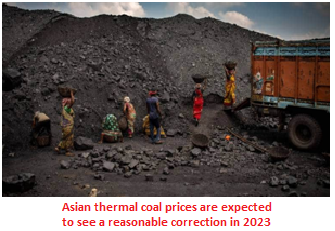 With the impact of the Russia-Ukraine war on commodity markets softening as the New Year knocks and several countries aiming to raise production, Asian thermal coal prices are expected to see a reasonable correction in 2023 given that supply concerns will likely take a back seat.

Indonesia, China and India have all announced higher production targets for the next year as part of their larger goal of meeting domestic needs internally, which is expected to lessen the load on the Asian thermal coal trading market, according to miners, traders and buyers surveyed by S&P Global Commodity Insights.

The Russia-Ukraine war shot Asian thermal coal prices to record levels in 2022 as additional demand from Europe, which sanctioned Russian fuel, created supply tightness. Even though prices have receded in recent months, they remain at levels higher than the average of the last two years.

Overall demand is expected to remain strong due to the robust economic outlook of countries like China, Indonesia and India. The impact of war will gradually ease as countries are adapting to new trade flows… India and China may continue to buy Russian coal, while also expanding their domestic production,” according to industry sources quoted by international media reports

We think that the market has lost its legs and will be lower in 2023,” a Singapore-based trader said, adding chances of a mild recession in Europe and Asia will also impact demand as well as pricing. “Demand is going to be weak in China and India, as domestic production will be higher.”

Chinese demand in January is expected to be weak due to Lunar New Year falling in the second half of the month in 2023, but some stability is likely in the next two months thereafter

Standard and Poor Global forecasts India’s imports in 2023 at 170 million tons, 5 to-6 percent higher on the year, while the 2022 forecast was 11 per cent higher on the year. “Renewables should show an increase for the year due to new capacity, and coal-fired power generation should only increase by about 20,000 MW year on year.S&P Global said in a report in November.

India’s coal production totaled 448.17 million tons over April-October, up 18.06 per cent on the year, while state-run Coal India Ltd., which accounts for over 80 per cent of coal mining in the country, produced 351.93 million tons, up 17.46 per cent over the same period. The country targets producing nearly 1.2 billion tons of thermal coal domestically by 2024.