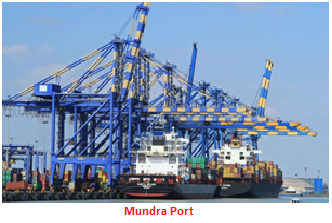 According to the latest figures, the four Adani Group-controlled Mundra terminals together handled 438,453 TEUs last month, versus 431,334 TEUs during October.

The private harbour also includes a DP World concession, named Mundra International Container Terminal (MICT), which handled 90,781 TEUs in November, versus 92,908 TEUs in the prior month. That takes Mundra’s November combined throughput to 529,234 TEUs, up from 524,242 TEUs in October, according to CN data.

The volume trend-up, albeit modest, at Adani’s flagship port is noteworthy, given the current demand pressure.

In addition to Mundra, APSEZ has container terminals at Kattupalli, Ennore, Krishnapatnam, Hazira and Gangavaram.

APSEZ has also signed a concession agreement for berth mechanisation at Haldia Port, near Kolkata, taking its Indian footprint to 13 locations.

It is also gearing up for a new harbour at Tajpur in West Bengal, a greenfield site expected to be in five years.

APSEZ has also been actively pursuing investments in global markets. The company recently signed a US$1.2 billion deal to secure concession rights for the Haifa port, Israel’s second-busiest gateway.

Additionally, the group has an ongoing terminal development at Sri Lanka’s Colombo Port.  The West Container Terminal (WCT) is targeted for completion in 2025 under a two-phased development, able to provide an annual capacity of 3.5 million TEUs when fully operational.

“APSEZ remains committed to its philosophy of ensuring sustainable growth in partnership with our key stakeholders,” APSEZ CEO Karan Adani said in a recent statement.