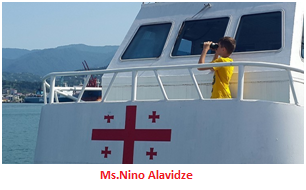 Georgia will adopt a new law on labour of sailor professionals to improve conditions of Georgian seafarers sailing under the flags of other countries and secure additional social guarantees for them, Economy Minister Levan Davitashvili announced on Monday 5 Dec.

Davitashvili said the adoption of the law stemmed from the Government's decision to join the 2006 International Convention on Maritime Labour, which brings together 1,200,000 seafarers and protects their social and labour rights.

I think this will improve the conditions of Georgian seafarers sailing under the flag of different countries, create and secure additional social guarantees, and also protect the rights of those working on vessels sailing under the flag of Georgia. This will further increase the reputation of our flag and also increase the demand for and prestige of Georgian seafarers", Davitashvili said.

Davitashvili said qualifications of Georgian seafarers were currently recognised by almost 80 different nations including 20 European countries, adding the profession was “quite in demand".

He also added about 14,000 seafarers were registered in Georgia, with their contribution to the economy “quite large” at over $200 million “according to various estimates".